Warmin the House Up

We got our new couch delivered last week and we are in love with it. On the furniture store website, they had a sale with a certain brand that included 2 free throw pillows with each couch purchase. That turned me on. So after we picked out the couch, I went over and picked up a throw pillow, asking the guy if these were the ones we got for free with the couch. He told me the brand we had picked was not included in the sale. Figures! So I thought, eh, maybe we'll just pick a couple up anyways. Then I looked at the price tag. $50 for ONE freaking pillow???? Forget it! It's just a simple upholstery pillow--no frills, and obviously NOT handmade. So I got to thinking, like do about a LOT of stuff--I can make that! We also picked out an ottoman that didn't really match the couch and recliner that we'd picked out. But it was so awesome cuz you could lift up the top and store like ALL kinds of shit!

I decided to make a couple of pillows that would match all the pieces, and even more color, if we decide to incorporate another color. Ha! Like we have color themes going on in this house! It's a little bit of this and a little bit of that. We've NEVER bought any furniture before. We've had lots of good hand-me-downs, stuff that's been around for a while.

Anways, here's the two pillows I made, and little glimpse of what the couch looks like. 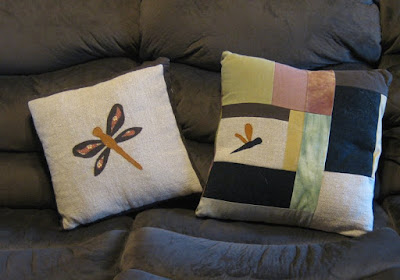 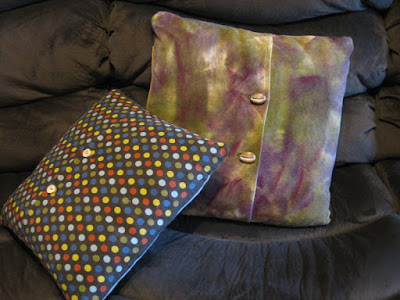 I used a mix of scrap hemp fabrics for the fronts of them. The back of one has another piece of hand-dyed hemp canvas, and the other piece is some cotton canvas I got at Joann's a while back in the remnant section. I like to make the pillows with an opening in the back in case ya wanna wash them or replace the insert. I ended up re-using an insert from a pillow I'd gotten back in the 90's. It was time to put that baby to rest--the old cover, and re-fluff the insert. I might go back and fill in some more batting on it, since it's flattened quite a bit.

After sewing one up, I decided they would have buttons too. Not only to add to the cute-ness factor of them, but to help keep it from bulging in the back. On one I used some antler buttons I'd gotten from a trade back in '07 at Floyd Fest and the other has some cowry shells. I added the dragonfly--my favorite applique to the fronts, using a quick and simple raw edge strait-stitch. I figure if they fray a bit, it will look cool, and if it frays too much, I'll just sew it again!

On Sunday night we ran out of propane. Sure does get cold here pretty quickly! I'm not sure why the people that run Blue Flame are such assholes in the office. When I called to see when the delivery was for our road, she kind of sighed, and said "What's the account name", all in that same sigh. Sor-ry for makin' ya have to punch those letters into that computer, missy! It is SO annoying when people act like they are doing you a favor by doing their fucking jobs!!!

So a new delivery guy came up yesterday morning, and was nice as can be. After a quick febreeze spray in the house, we let him in to check on the furnaces, light them, and check for leaks. Last time they charged us for "maintainance", since we'd run completely out, they didn't check for ANYthing. Now we know what' they are supposed to do, and they won't be yankin' our chain around next time!!

Back to the Sewing
I'm finally beginning to feel the sewing mojo coming back around here. I'd been super stressed from the holidays, and my clothing kind of went on the back burner. One of the factors has been this broken (but very important!) part on my serger. 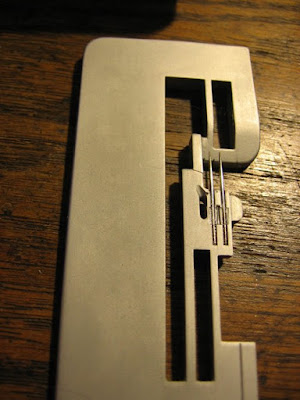 It cracked a while back, and starting catching the fabric as it fed into the machine. It took me a while to figure out what it was, but I finally took some pieces off to see what was going on. The part isn't easy to find. The first time I bought one (right after it happened) in the summer, I was charged for the part ($50 for the damn thing!), but never received it. I looked around for another, but kind of gave up.

My back-up serger (My ORIGINAL Janome MyLock 134) needs to be serviced, as the timing is off, and has been skipping stitches. I'd been using that, and decided to go take a look at the broken one again. I brought it up to my landlord who is a welder, and asked if he could look at it. After about 6 weeks of it sitting on his desk, I came up to retrieve it, hearing that his tools would probably melt it. Back to square one. So I figured, what the hell do I have to lose, I'll super-glue it. And it worked! For about 6 months more. Then the glue wasn't holding anymore. I found the part on eBay and ordered it. Well, I got a part, but it didn't fit. Figuring I was on my way to a major chew-out to the seller, that this did NOT fit my serger, I soon realized when I checked the auction, that I bought the WRONG part. FUCK!

While trying to install it, what do I do? Scratch the fucking plate with my screwdriver! Now I can't even return it to him! So I go back on and find one that looks JUST like mine, but it is for a different model number. I order it, telling him that I need it ASAP, for my model machine. He writes back and tells me that the one I just bought won't fit my serger either, but that he did have one that will fit it. Yay! So the (hopefully) right part will be here very soon and I'll be stitchin away back to normal.

I have a wrap skirt I'm working on, but need to get to the store for a few new supplies. Can't wait to share that with you all!

Those pillows are amazing!! Does it feel pretty uptown to have a brand new couch? I've never had the pleasure--hee!

LOVE the accent pillows mama! Way better than what you can get at the store!!!

luv the pillows! especially the one with the shell buttons. =) never cracked my serger plate!!! but i have broken off quite a few of those "fingers"....grrr...those plates are expensive! hope you're back on track.

soon. i hope you're back on track soon. fingers got ahead of me....lol