Sweet tomatoes
You guys are probably wondering about the tomatoes and sweet treats, huh? Well, the caramel didn't turn out exactly as planned. The first batch turned out too thin--I added an ingredient at the wrong time. It was just too tasty to throw out, though. It makes a great ice cream topping, as we discovered last weekend at my brothers place in DC. The second batch turned out better, but still too soft. I managed to chill them and package up most of them, but there's still some in the frig that I may never get around to cutting and putting inside little candy baggies. Kinda got sick of that. But now I realize why that one lady on Etsy is selling her caramels at such ridiculous prices. . . cuz it ain't easy, folks!!!

I want to let you all know about one of my our favorite summer treats we had while growing up. Every year my dad plants several rows of tomatoes. Usually we're up to our ears in tomatoes this time of year. This year they are coming around slowly. We raided the garden of the neighbors of my folks. Boy, did we have some tomatoes, let me tell ya! My brother, sister and I walked out with about 5 grocery bags of tomatoes, cucumers, peppers, zucchini and a few cantaloupe. Looking back as we left, we realized the garden looked as if we had barely touched it. When I came back this past Sunday to get more, I ran into some other friends raiding the garden. Would you believe there was only about 4 half-ripe tomatoes in there? Those people CLEANED it up. Tomato hogs!!!!

Anyways. On to the food I was talkin' about. My mom makes Rellenos (pronounced Re-ye-nos), and they are sooooo fuckin' good!!

Start off by cutting the tops off of some nice ripe tomatoes--this makes about 6-8. Scoop the center stuff out, taking care not to tear the shell. You can store the insides in a container and make sauce out of it later. Cook up about a cup of rice, then spread on a plate to allow to cool. Mix up with a can of tuna fish, drained. (You can omit this if you're veg with still good results) Chop up a handful of black and green olives, and several sprigs of fresh basil. Add about 1/2-3/4 cup of mayo--I used low-fat, and mix until creamy. Add salt, pepper and a squeeze of lime or lemon juice to taste. You can also add fresh chopped garlic, and assorted other herbs. Pine nuts would also be good. My brother told me he used crab meat and it was also delish. We used couscous one Sunday dinner at my folks and that was pretty darn tasty, too. 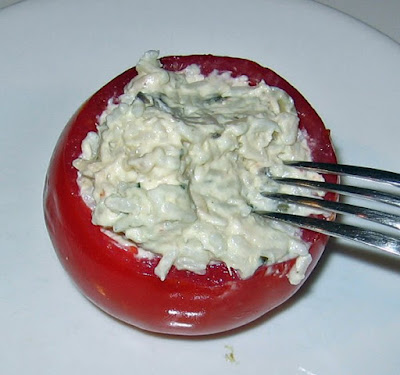 Unfortunately it didn't photograph very well, but I can assure you it tastes a million times better than it looks. You will be addicted, though!


Give it a shot
I want to share with you all one of my favorite new sewing notions. Temporary Spray Adhesive. I've been using this for knit fabrics when I do applique. The usual heat-n-bond often leaves a thicker surface, which helps to satin stitch upon, but can make knit fabrics appear puckered. This stuff is great! You can even use it for hems, but I haven't tried that. 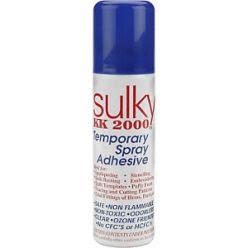 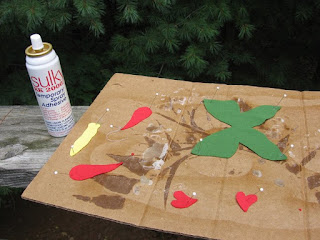 Here's my little spray station--haha!! I put them on some cardboard and spray outside--cuz the stuff has some fumes to it. I lost a few pieces over the deck until I started pinning them down. Tee-hee-hee!! This was one of the butterflies I put on some Rasta stuff I made for the Reggae Fest earlier this month. Just a little shot is all ya need and it is also re-positionable!

On the Sewing Front
I've been working on stuff this week for the Wilderness Jam next weekend. I thought it wasn't until the weekend after, but it's not! I've got to get moving with some inventory. I really don't expect much, sales-wise, at the festival. It will be a small affair. The summer kind of burned everyone out, financially, and this will be the last of it in my neck of the woods. Then next month: Apple Butter Festival!

I was a sewin' fool yesterday!! I got 3 pairs of hemp pants done. One pair matches another, so it can be a matching mama/papa and baby set!!! No pics yet, though.

On Monday we had a really beautiful sunset, which is not unusual on our little hillside. Tuesday had me inspired to make another tree skirt from that beautiful pink and purple sunset. I gathered up pieces of my hand-dyed cotton fabrics to make up the sunset. Stretch corduroy in a rich purple was the background, with tiered batik panels on the sides. I finished this up Tuesday evening, then met up with my friend Tiffany for dinner in town. We came here to the house after dinner, and she was just mesmerized by the skirt. She tried it on and basically didn't take it off! Quickest sale EVER!!! 2 hours after I finish it, the thing sells! I wish I could always do that! For some reason, I had a feeling that Tiffany would like it when I was working on it. I almost thought about hiding it, cuz I knew she would want it. Sometimes it's hard to let go of my creations. It gets easier as it sits around, and, well, I guess I get sick of seeing it. I love making something, putting it on my dress form, and getting to look at it each day, as i move around and do about my regular routine. But this one was gone before I got to know it! Sell it now, or sell it later--I'm just glad it's going to such a loving, appreciative home. 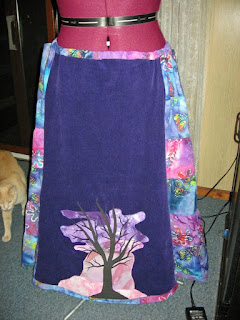 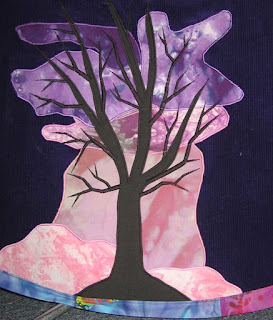 I'm going to be accepting a limited amount of custom orders thru my website. Hopefully I won't get too far ahead of myself! Still have LOTS of batiks to get ready for the Apple Butter Festival!

Thanks for listening, folks! Until next time!!!

Just for you, baby stalker. . .
I've been watching the traffic on my website, and also on this blog. Apparently someone logging in using Virginiaberryfarm Internet Service Provider has been looking for something. . . .nearly every other day. Feel free to send me a message if you have something you want to know about. I'll either tell you or let you know it's none of your freaking business.

She'll be comin' round the mountain when she comes. . .

I'm still here! Just been a lazy blogger, I guess. We went to Nelson's Ledges for Reggae Fest. The music was the best line-up of the year; Midnite, as usual, were great and I got turned onto Berres Hammond. It poured buckets of rain that night, but I had my rainboots and rain jacket on and the cool rain felt good on skin. The quarry was beautiful and it was awesome to see a few of our friends, but I'm just not too sure about that place. Quite frankly, the sound system sucked major ass. The general vibe of the place was okay, but I think the Cove blows that place away.

I finished up a custom order wedding dress this week. Well, yesterday, actually. It was a simple dress design. My client is getting married at the beach and so she wanted something light, casual, and CHEAP! I told her I'd do it! I used just plain unbleached cotton muslin, as requested, and trimmed it with a cappuccino satin ribbon, the same color thread I used thru-out. There are some cute 3D flowers at the bodice. It's strapless and has an underskirt that I'm surprising her with. Since the muslin was thin, I wanted some sort of liner. I couldn't get pics yet because it's too small for my dress form. I hope she'll send me tons and tons of photos so I can add them to my gallery.

I plan on doing some cooking later on. I won't let the cat out of the bag just yet. But you're in for some tomato talk and some sweet treat reading later on. . . 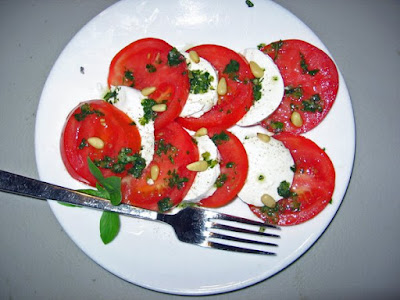 Oh yeah. Tomatoes and mozzarella baby. I made a little pesto and threw it on there because sometimes I don't like chewing thru a big ol' piece of basil. The sprig is there JUST for garnish cuz I needed to take this pic for this blog. :)


Here's a dessert I made a while back. Get some butter melted in a pan and add some brown sugar. Throw in some diced fresh pineapple and let it get all brown and gooey and just plain yummy smelling. Then eat it with ice cream. Or slurp it up, cuz the pineapple is so hot it just melts it right away. It's some good shit. 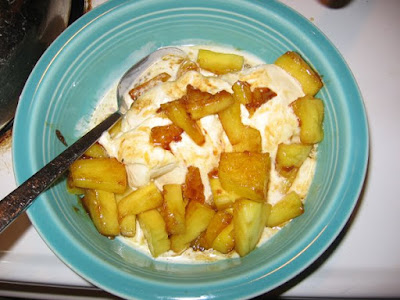