Oh yeah, and she's feelin' good! Remember that song from that show Alice? (I just had to google that)

Yes, I seriously am blogging at 2 in the freaking morning. You know you are a foodie when you blog about a restaurant and you still have lots of pictures of more food to resize and blog about later.

We got this new restaurant in town, called the Earth Dog Cafe. As soon as we saw the sign for it, I knew it had to be good. It also had a sign in the window that said "Hippies use Back Door" haha. . .

The menu is a bit limited, but what they do have kicks serious ass. They are (I think trying) to have BBQ for their main "thing", but really, what the best part about this restaurant, is the fact that they serve breakfast all day long. That has to be the best idea EVER. It's cheap, everyone loves it, and it's fairly easy to NOT screw up. Usually we end up paying about $15 plus a tip before we leave there.

Here's the daily special board. I love that. 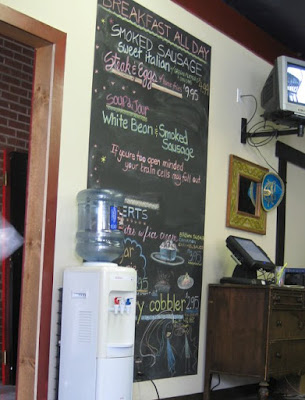 I decided to try their veggie burger, and boy was I pleased. 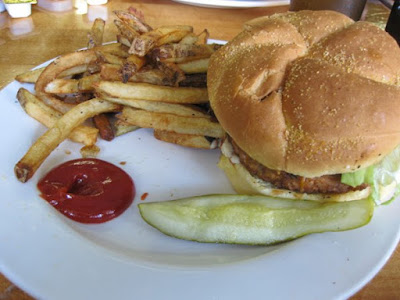 Oh god, I want that NOW!!!!
Just had to add that the pickle was one of the sorriest ones I've seen. It was shriveled up and looked so lame that I didn't even try it.
Hubby got a classic breakfast. Their hash browns are probably one of the best things they have going. The flavor is just incredible. Full of fresh potatoes, spices, and onions that even the hubby will scarf down. 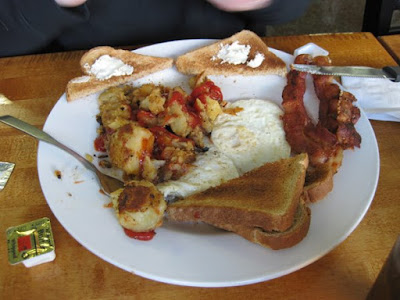 Here's a little sneak peek of some arm warmers that I worked on this morning. These will go up either on Etsy or my Website within the next day or two. 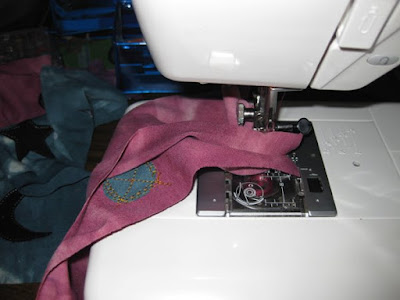 I cleaned my sewing area after that picture. I was all, "oh, I'll just do it Fly Lady style, and just do a quick pick-up in 15 minutes". Ha! 15 minutes later, and I was still sorting thru one of my bins of "sewing tools" that was filled with fabric scraps, cones of thread, and a bunch of other crap. She's looking WAY better now, and it's a heck of a lot easier finding my stuff. My sewing "room", however, is a completely different story. Maybe I'll blog about that some other day. . .

breakfast all day is SO key!!