Last weekend I made some of my favorite bread. I love to use this recipe for wheat bread since it's really soft and delicious. The only change I made was to use melted butter instead of melted shortening--cuz who the hell wants to eat that? It makes two loaves, so I decided to make half bagels and half cinnamon walnut bread. 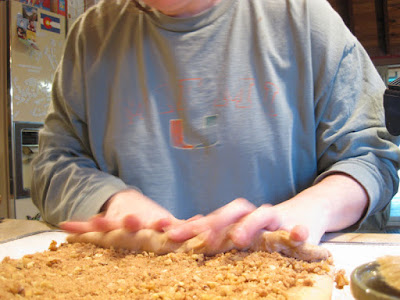 The bread was soooo freaking good! We ended up eating it for dessert and breakfast with some fruit salad when my girlfriends came to visit me last weekend. Most of the bread was gone before trying it any other way, but I bet toasting it up and slathering with some butter, that bread would be drool-worthy! 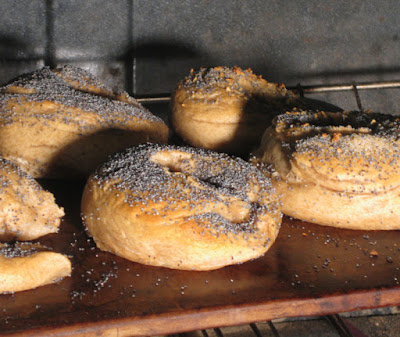 All of the bagels had poppy seeds, and some had some dried onion flakes and garlic salt, for sort of an everything bagel. I'm still on the look-out for fennel seeds. I'd like to try to make Vegan Dad's lunch meat again--which I wasn't that thrilled with, but with a few modifications, I might like it better. These were big bagels--too large for my liking. It feels like you'll gain 10 pounds eating a full bagel, so I've been cutting them in half. Next time I will form them smaller, but still wide enough to make sammies out of. 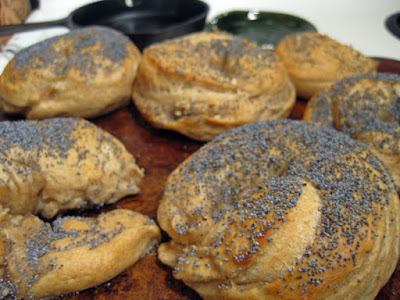 oh man, I can't eat wheat, so I am trying not to look at these rugged tasty bagels... but the poppy seeds on those bagels look delish, so I'm going to make a breakfast with these soon.

Thanks for inspiring me!