I know, I know. It's a cheezy blog title. But I couldn't think of much else to call this. It's Fall, the wind is blowing like crazy outside and it's freakin' cold. We had some spectacular foliage during the past couple of weeks. That ended quickly, as it does every year, when the wind comes and rip all the leaves down from the trees. Still plenty are hanging on, but I'm staying inside during this chilly windy day.

I've made 2 pretty good soups lately. Last week I made Wonton Soup. I've never made that before. I have made wontons, and I usually have the wonton wrappers on hand to make hor-dourves (or however the heck ya spell it) and stuff that's snacky like that. I chopped up some onion, carrot, cauliflower and portabella mushrooms, sauteeing it with some ginger and garlic. I seasoned it up with some Rice vinegar, Braggs Liquid Aminos, black pepper and sesame oil. This filling got carefully put inside the wonton wrappers, sealing with water. I think I'll use a bit of flour and water paste to seal them next time, as they easily opened up in the broth after cooking. 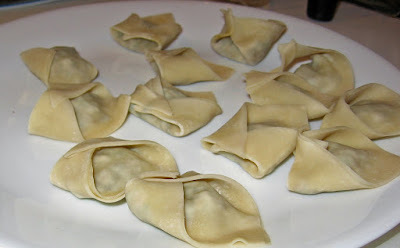 The broth was made using a bouillon paste, water, chopped garlic and minced ginger, more braggs, black pepper and some torn Nori sheets. I do like the convenience of this bouillon paste I've tried, but I think it's too salty for the suggested proportions. 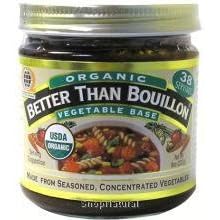 Next time I'll add less bouilion or more water. I added some leftover pan-fried tofu, half a can of chopped baby corn, and carrots. 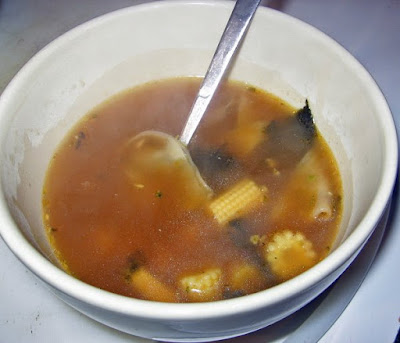 The soup was pretty tasty. I'm not really one to put an exact recipe, cuz I just sorta wing it. If you can't figure out how to make this, well I guess you can google it. Or just go back on the internet and complain about it.

Last night I made some kick-ass Lentil soup. Again, kinda salty, and I forgot about the saltiness as I added some celtic sea salt. Today I'll add more water and try to remedy it. 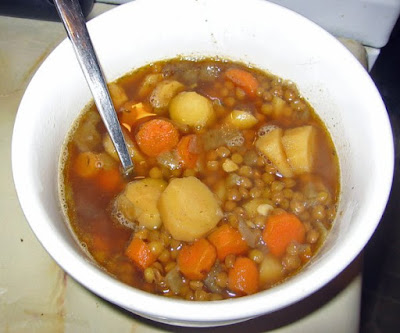 The lentil soup was made from sauteing one chopped onion, 1 cup each sliced carrots and parsnips, and some garlic. I always season the veggies as I cook with salt and pepper. Then I added 1/2 cup lentils and about 5-6 cups of water, with the appropriate (too fucking salty) amount of bouillon base. I let it cook for about an hour and it was fabulous.

7 things ya may not know about me:

I throw my "composting" stuff out into the woods in the back yard. Nothing brings me greater joy than to see rotton tomatoes bouncing off trees and pineapple tops getting caught in the limbs. The cats often run after the missiles.

When I was in 9th grade, I farted in Math class. I had bent over to pick up my pencil, and "whoorrenn" came out of my butt! It was those school desks like this: 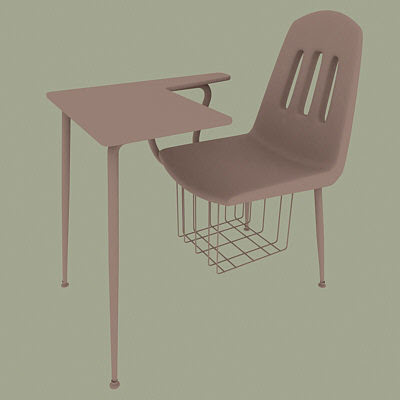 My husband and I got married in a drive-thru wedding chapel in Las Vegas. It was awesome.

Sometimes when I'm at home by myself I won't shower for up to 3 days. I just run for cover when the UPS guy comes.

When I was young and we went camping, (I have NO idea where this place was) we discovered a bike trail that went down into the woods. The trick was, you had to turn quickly or bail out to avoid going over the cliff and dying. I guess we were good on bikes.

I hate raw onions. I've been cooking with them a lot more lately, but if I get something that happens to have onion in it, it's pretty much a ruined meal for me.