I'm back on Blogger!  My laptop is pretty much done with.  I got a new camera a few months ago and took tons of beautiful pictures.  I'm pretty good about saving my pictures religiously to my computer and getting them off my camera's memory card.  Well, a sorry-ass computer is NOT cool for keeping those pictures on!  I quickly filled it's capacity with RAW files over and over and over again!  I decided to go to an online backup saving system, and chose Carbonite.  It backs up all the files you want so you can restore your computer or access them when you're away from home. 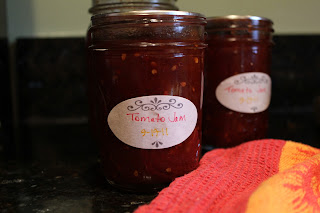 Here we are, almost 3 months later, and Carbonite is finished uploading!  Yes, it took over 2 months to backup my 60 gigs of crap from my old computer. 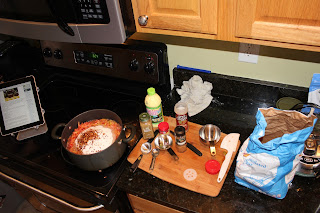 Not sure if I mentioned or not before, but this past Summer began my debut of home canning.  At a local farmers market shop, I saw a beautiful display of blackberries, at their peak, and swarming with fruit flies. "Eat Me!" came to mind, and so did "Jam me, baby!"  Two for one on sale, I picked up several baskets, along with some fragrant peaches and colorful tomatoes. 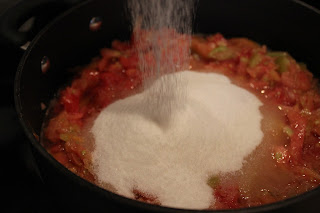 And so it began.

I bought the Ball Canning book, one of the best things ever created for people who thought canning was a thing of the past, or something that you'd have to slave over.   Sure, it isn't something that you can whip up in a few minutes, but, as with most things in life, it takes time and patience and you'll be rewarded ten fold. 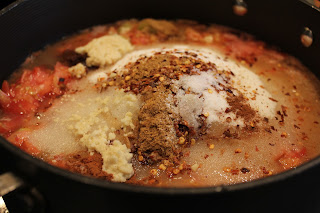 I began with a couple of standard jams, and moved onto a few sauces.  My absolute favorite item so far is the Tomato Jam, from the Food in Jars website.  Sweet and spicy, this jam gets slathered onto cream-cheese'd homemade bread, crackers or bagels, as a spread for veggie burgers, and mixed with mayo and balsamic for a mock-thousand island dressing in my Seitan Rueben Sandwiches, and so much more.  It's first bite is creamy sweetness, then a bit of warmth surrounds your taste buds, leaving them yearning for another bite. 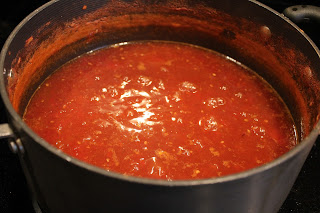 This used up some of my own tomatoes (even green ones!), in my late Summer garden, along with some beautiful heirlooms from the local farmers market.  In my second batch, I used up some not-so-good-looking tomatoes from another stand (which I question the "local-ness" of), and it was equally as good.  My second batch was kicked up with some garlic, onion powder and a bit of cumin. 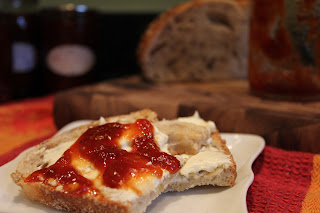 You'll have a large pot filled with stuff, which you'll cook the shit out of.  Mine took me about 1 1/2-2 hours, but it might take less cooking time if you use more pastey tomatoes, like Romas.  I just used what I could find. 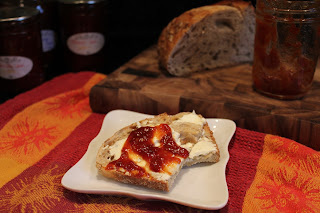 Hope to be back soon!

Tomato Jam is a favorite of mine! I must have made 5 different versions this past season. Last night I cracked open a jar and spread it on some toasted bran bread, topped it off with some provolone, and put it under the broiler, my favorite snack!

Ahh! Yumm! A quick snack?! Put a cracker w/ some Havarti in the micro for about 10 seconds and then top with the tomato jam! I really enjoy the heat and cold at the same time! Kiss-kiss my canning friend!

I'll be nice :)Canning seems like it could be a really enjoyable pass time or job because it also seems like work. I have heard of tomatoe gravy and other tomatoe recipes, but I have never heard of tomatoe jam before. If I ever get an opportunity, I will give it a try. The commenters speak well of it.