What's shakin on the homefront

Maybe ya been wonderin' where I'm at?? Well, I've been super busy preparing for Summer festivals, including my favorite--the Rothbury Festival; which you can read about here.

I'll share a few sneak peeks of some new pieces. 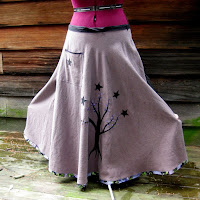 This one is made from hempcel (hemp and tencel blend). I dyed it to a lovely mauvy-deep lavender color using Procion Dyes. 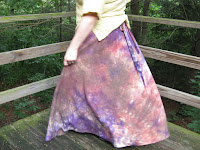 This next one is made from the same blend, but dyed a multi-color purple, rust, even a bit of yellow. Each of these skirts take about 3 yards of fabric, and it's not cheap! But it's really amazing how these feel when you put them on. Half-circle style, with an attached waistband/ties with carriers around for multiple sizing. I also put pockets on the side of each one.

A big event did take place last month. I really don't like to bring ANY kind of negativity to this blog and try to keep everything on a positive note. Cuz who the hell wants to read about ya bitchin???

Well, here it goes. Having been a few weeks, I've managed to recoop a bit. At Delfest last month, we had to leave early. The fest was to run Thursday thru Sunday night, but on Saturday, a rain storm proceeded to rip my entire display down. I've NEVER been in such a terrifying moment in my whole life. What started out as big rain drops turned into hail, lightning, and then TERRIBLE winds. I had two great vending partners with me this time, and we began doing the usual rain maintenance. Pulling the sidewalls down, moving items from the areas prone to leakage, pushing out the rain from the bellies that form at the canopy cover, etc. Then the winds picked up. We each held on to a compromising leg--meaning ones that weren't weighed down by gridwall or weights. After the front tent lifted up from the wind, with all 130 lbs of my partner Rebecca, hanging onto it, we knew there was no way we were going to beat this storm. We ran for cover inside my cargo trailer, and held the doors shut, peeking out from time to time to check out the destruction.

2 hours after the storm started, we began the clean up. Both of my canopy tents were destroyed, the legs and arms snapping like small twigs, and all of our beautiful merchandise was thrown into muddy water. We were walking around in a big huge sponge, littered with what had become our home for the weekend. 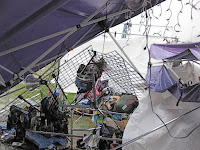 The devastation immediately took effect. All the items that we spent so much time on, were thrown down in an instant, with no relief from mother nature. 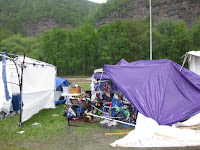 We are okay. Most of my merchandise is okay, too, although some pieces are ruined, and will need to be discounted or given away. It just made me think how quickly things can change, for apparently no given reason. 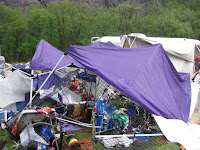 We later found out that an actual tornado had been in the area. In the end, my canopy tents lay in the destruction graveyard, which we started in the center of the field. We saw at least 10 tents in the pile as we drove off, defeated.

What doesn't kill us makes us stronger, right??
Leaving on a positive note, here's some mini tarts you can drool over. I got to use my thrifted French mini tart pans and felt so food-network-y. 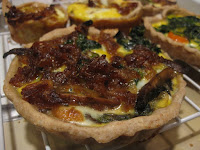 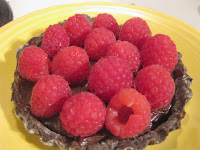